The following pictures are meant to display possible physical characteristics of the present invention and are not to be taken in a limiting sense. It is understood that other embodiments may be utilized and that structural changes may be made without departing from the scope of the invention. 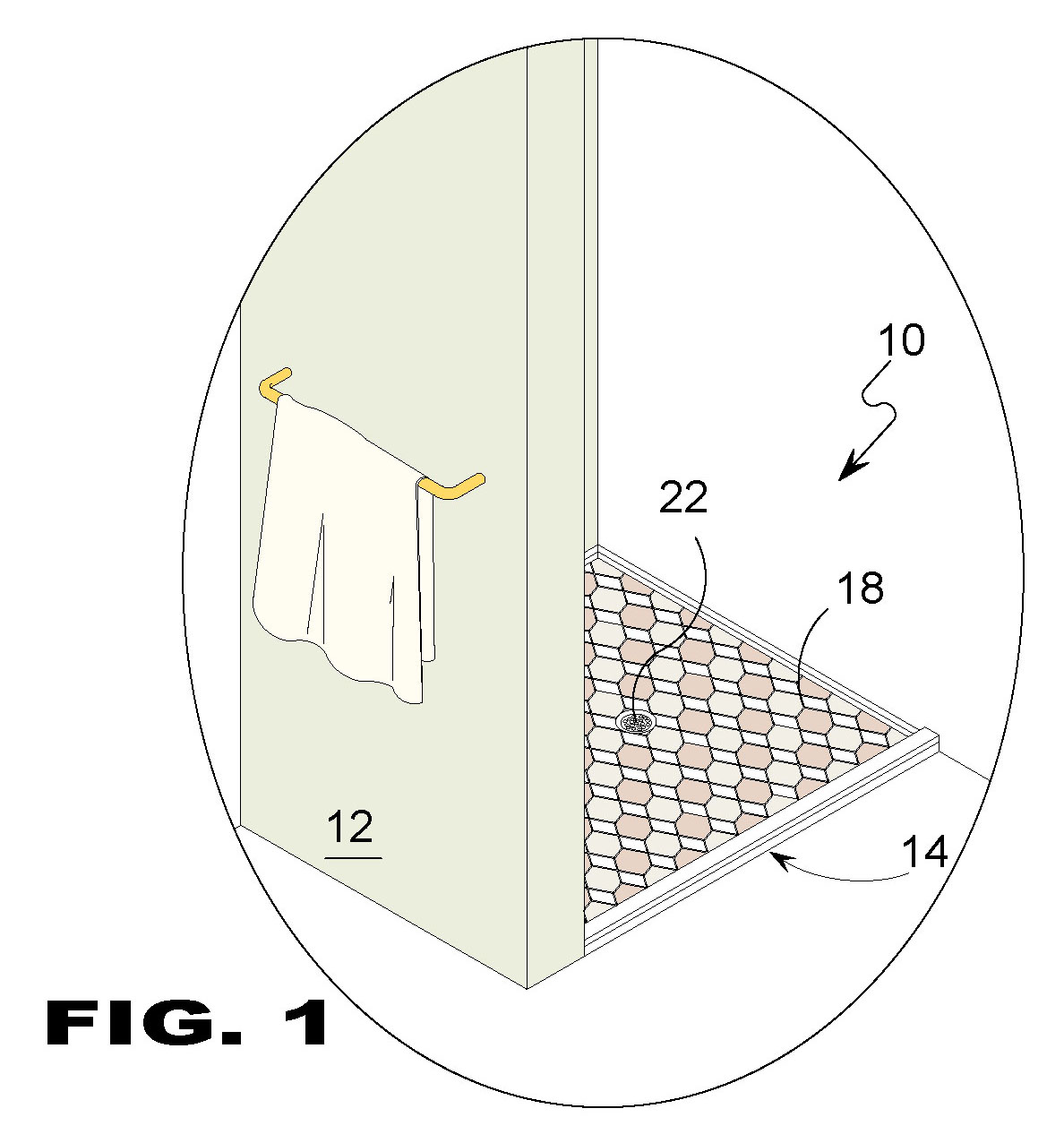 An illustrative view of the present invention is seen in Figure 1. It is generally indicated at 10 and consists of the shower pan 14, a shower pan facing (top) surface 18, a drain 22, and a pan mold edge 16. This prefabricated unit 10 is placed within a shower stall 12 and then simply plumbed in as will be discussed further below. 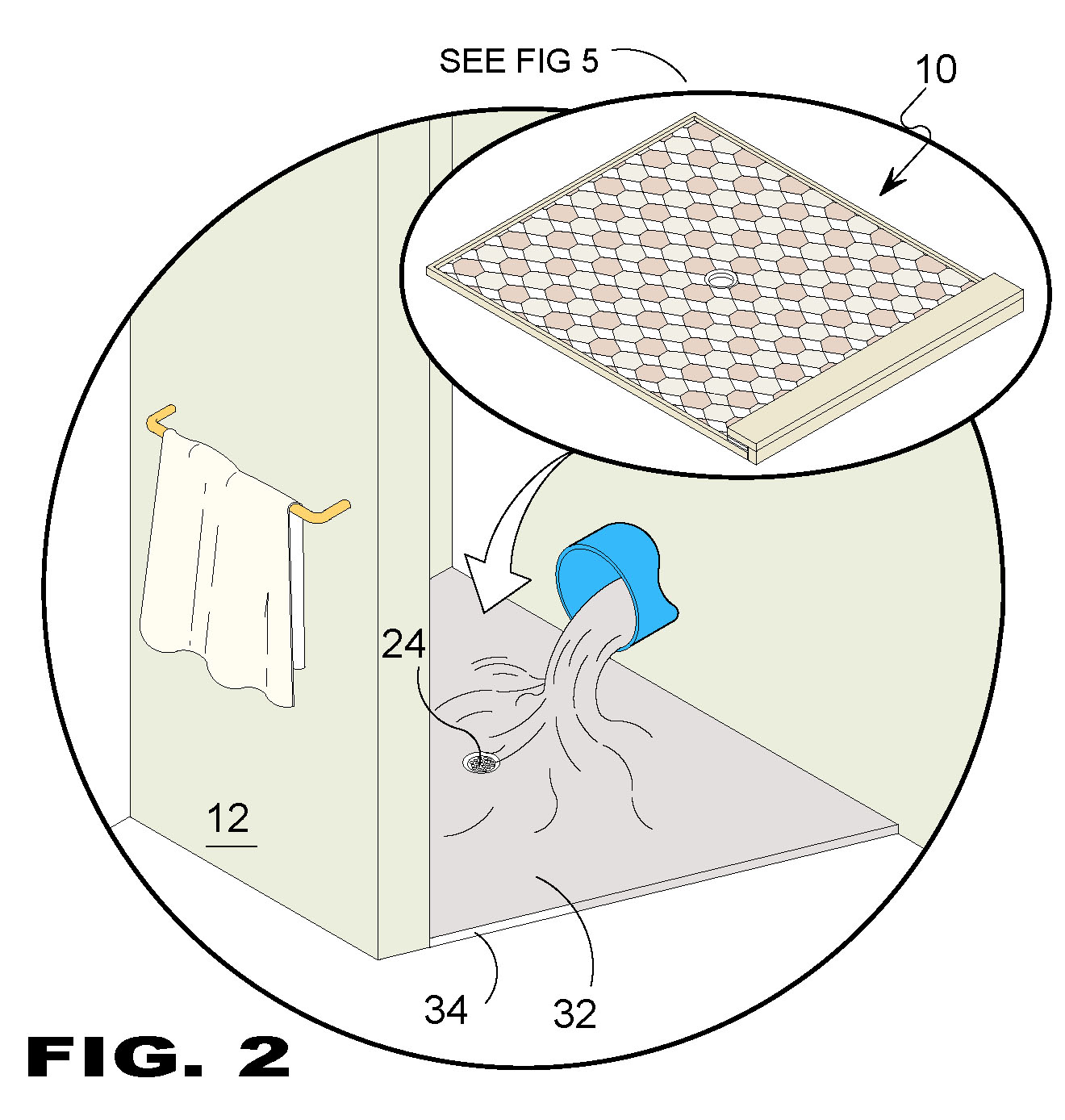 Turning to Figure 2, the initial concrete pouring step on-site is shown. The concrete 32 is poured into the base of the shower stall 12 as seen between the drain periphery 24 and the concrete pour edges 34. Also seen in the Figure is the completed present invention 10 ready to be installed in place. In the factory (off-site or in a different location on-site) the mold for the shower pan 14 is prepared. Pan mold edges 16 are cut and fitted together to create a mold to receive the resin/filler matrix 20 as seen in Fig. 4. The pan mold edges 16 could be made from a variety of materials such as cut stone, various grades of plastics, metal such as stainless steel, or the like. Tiles 26 (as discussed below) are placed “face down” in the prepared mold to form the resulting shower pan face surface 18 and limestone powder is poured into the crevasses between the tiles 26. Then the resin 20 is poured. It is contemplated that the resin/filler 20 would be a material such as STYPOL® which is a sprayable (or pourable) resin. STYPOL® 040-4950-4953 is the fastest cure in colder temperatures with -4968 being the slowest cure for higher temps. The cure time needs to be kept in mind when the facing or tiling part of the manufacture process is reached, if a large number of individual tiles are going to be placed within/on the matrix. According to manufacturer’s literature, STYPOL® -6095, 6097, 6098 could be used for a marble matrix formation with 25% STYPOL® and 75% calcium carbonate (with any necessary catalyst, depending on circumstances). This would provide a non-tiled shower pan surface. In any case, note that the resin/filler 20 is sprayed, poured, or otherwise placed within the pan mold edges 16 and the drain periphery 24. It should also be emphasized at this point that the sizes and shapes of the pan mold edges 16 are determined by the location into which the present invention 10 is to be installed. The sides of the shower stall are measured at the base and an entrance step, if desired, is accounted for. The location of the drain pipe that the shower will be plumbed to is noted and then the mold is constructed and the resin/filler is sprayed or poured within it as shown. 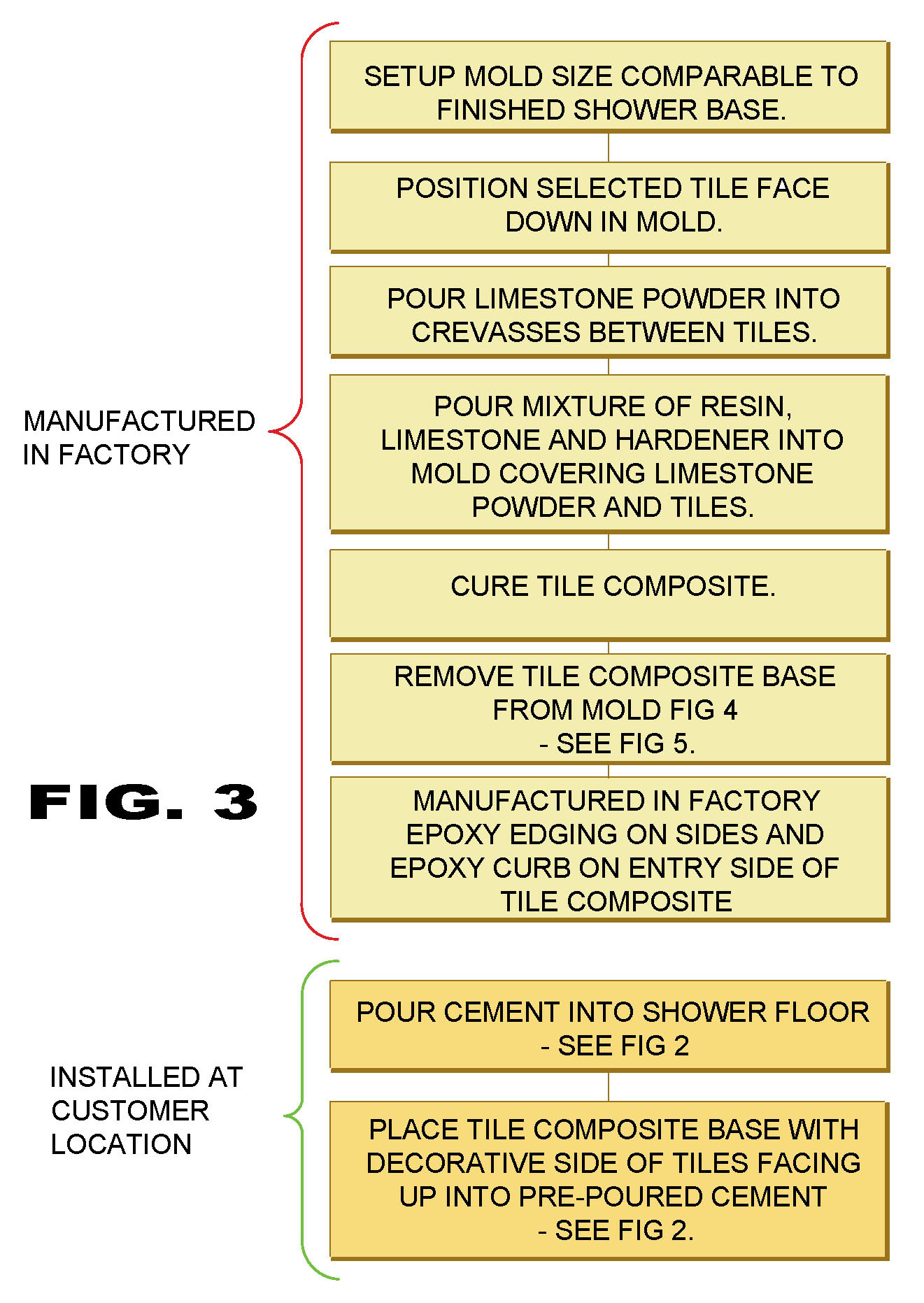 Figure 3 is a flowchart or block diagram of the steps of the present invention that shows both the on-site and off-site procedures. 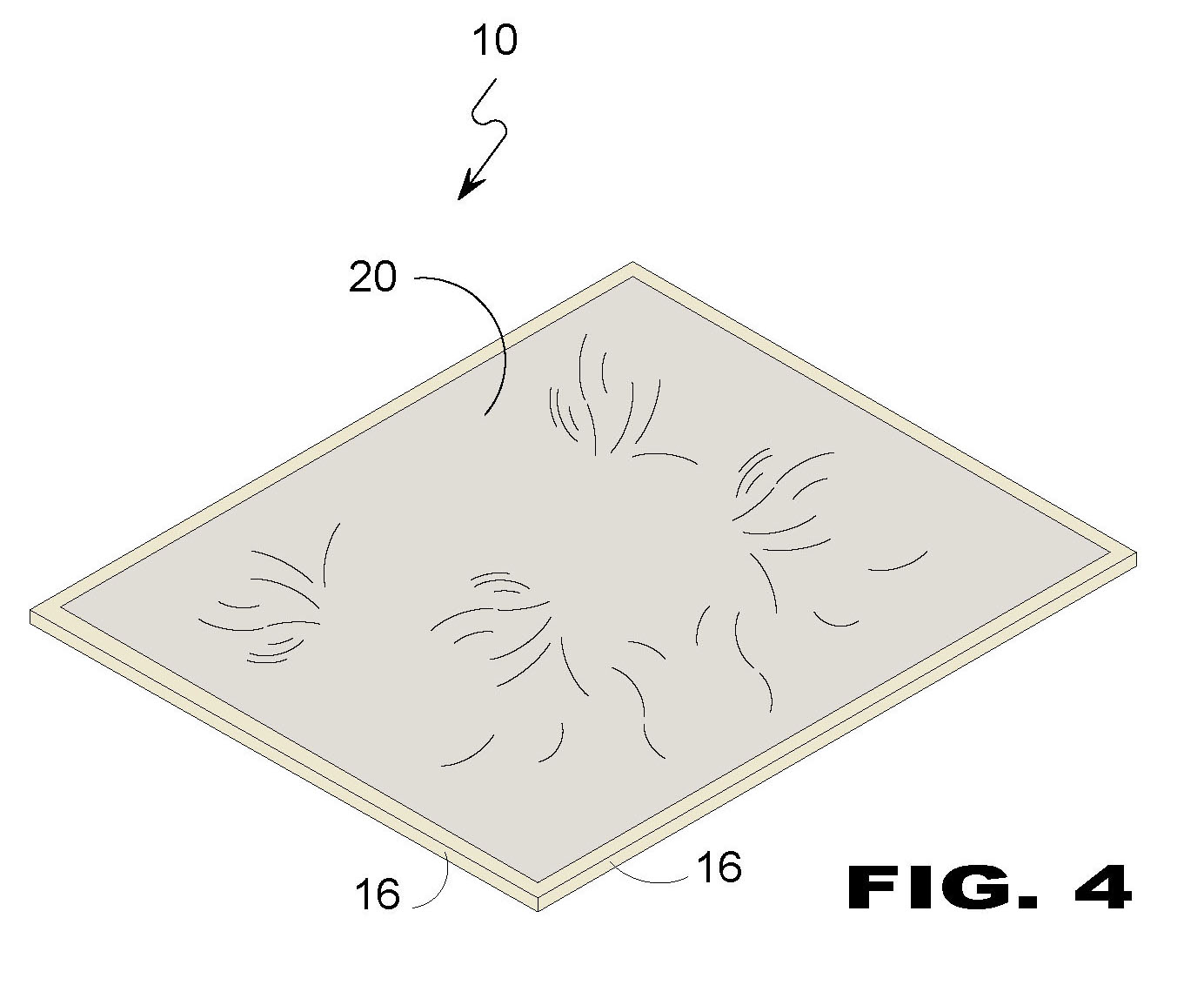 Figure 4 shows the curing step of the present invention. The times needed for curing can be predicted and/or influenced by composition of the resin/filler and temperatures. Tile designs can be pre-planned and pre-cut to make quick work of it while the resin/filler 20 is curing. This eliminates the need for an on-site tile layer when the shower pan is being installed. Additionally, this method eliminates the need for the tile layers to travel to various sites (or locations on-site) in that all the tile laying is done at a central location, either at the building site or at a shop. 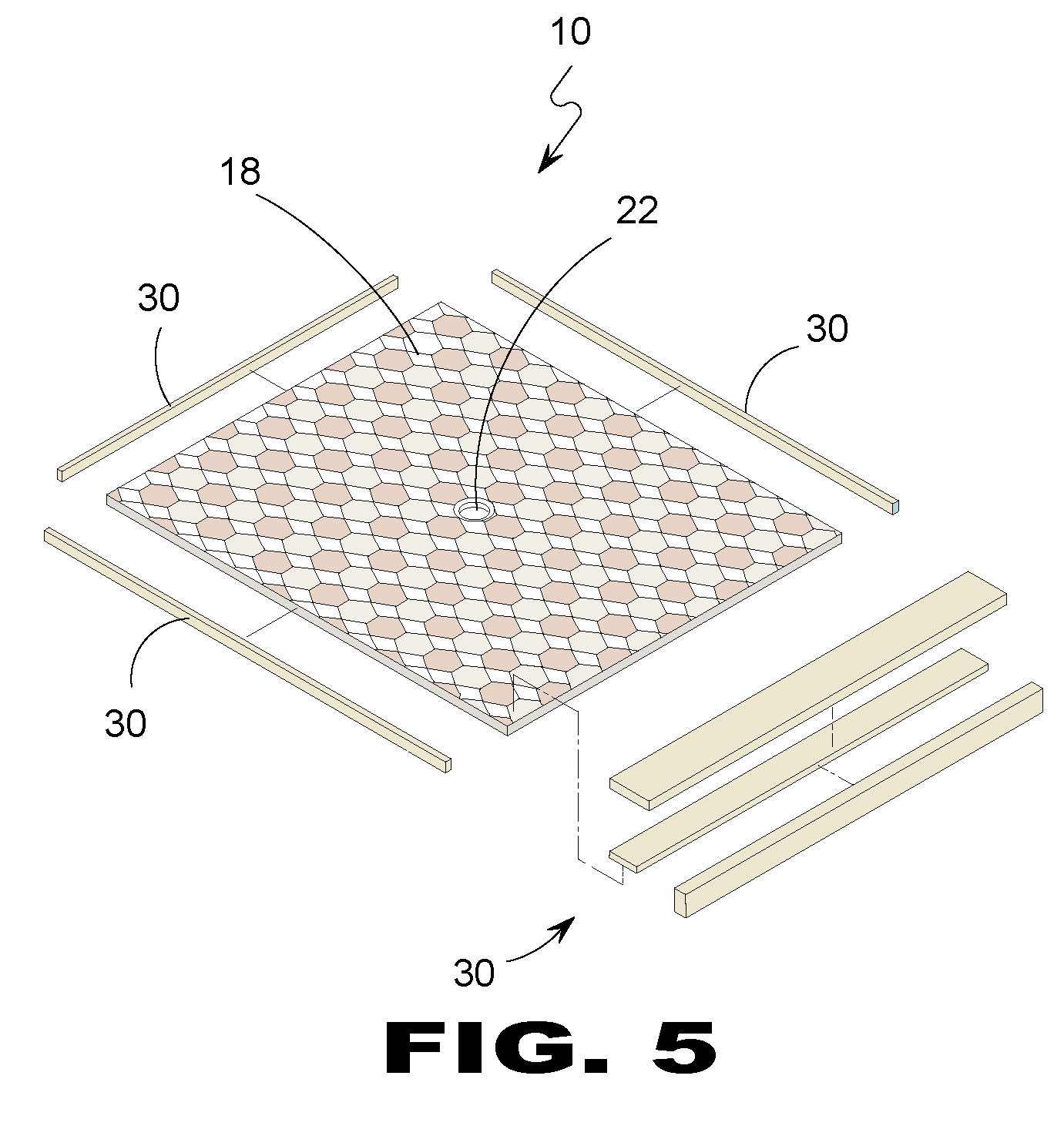 Figure 5 the curing step is over and the shower pan 14 has been turned over or “flipped” so that the shower pan face surface 18 is uppermost. The pan mold edges 16 have been removed and a curb or threshold 30 is ready to be assembled and installed. 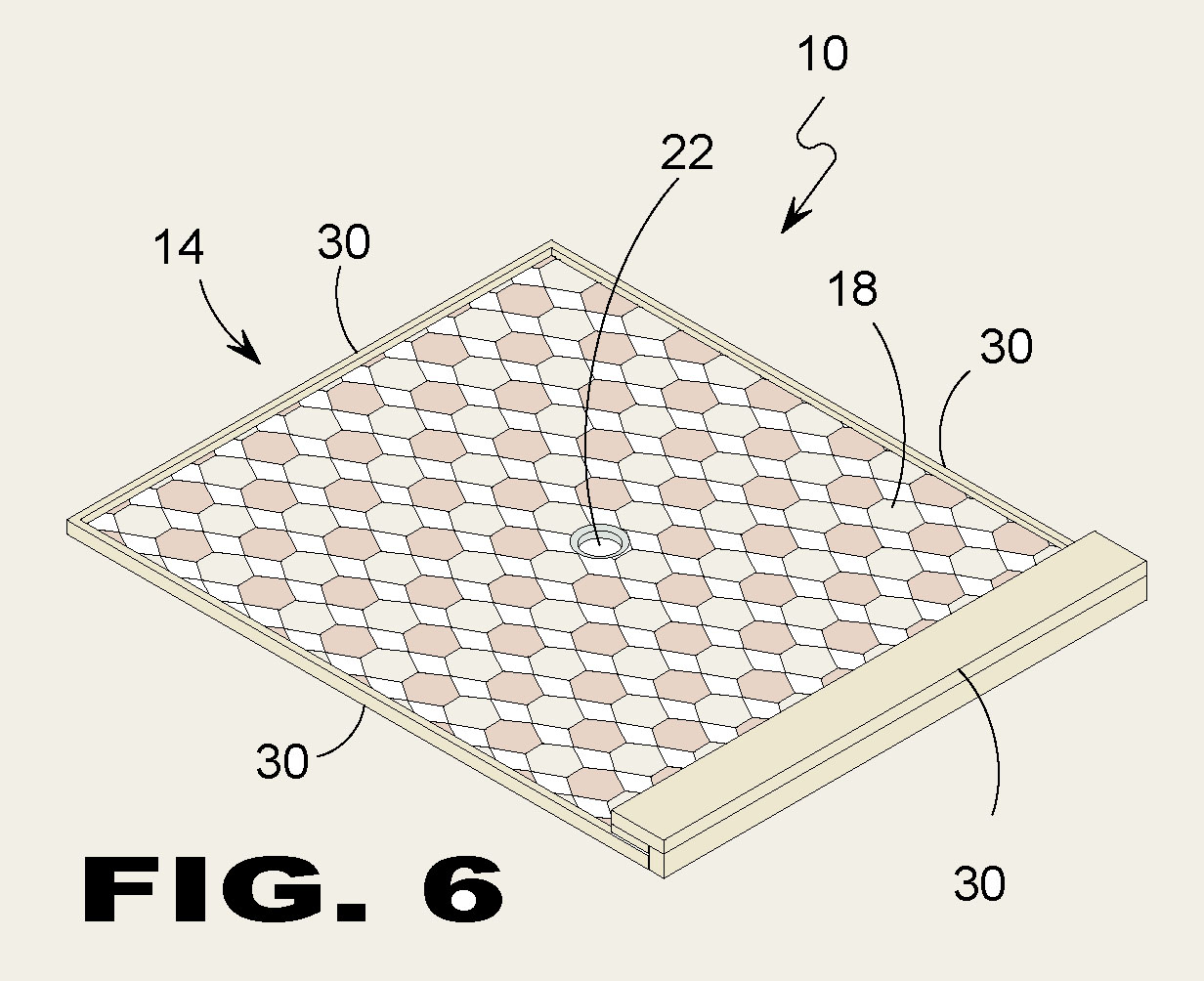 Figure 6 the curb/step 30 is installed and the shower pan 14 is ready for placement in the predetermined location within a shower stall 12. 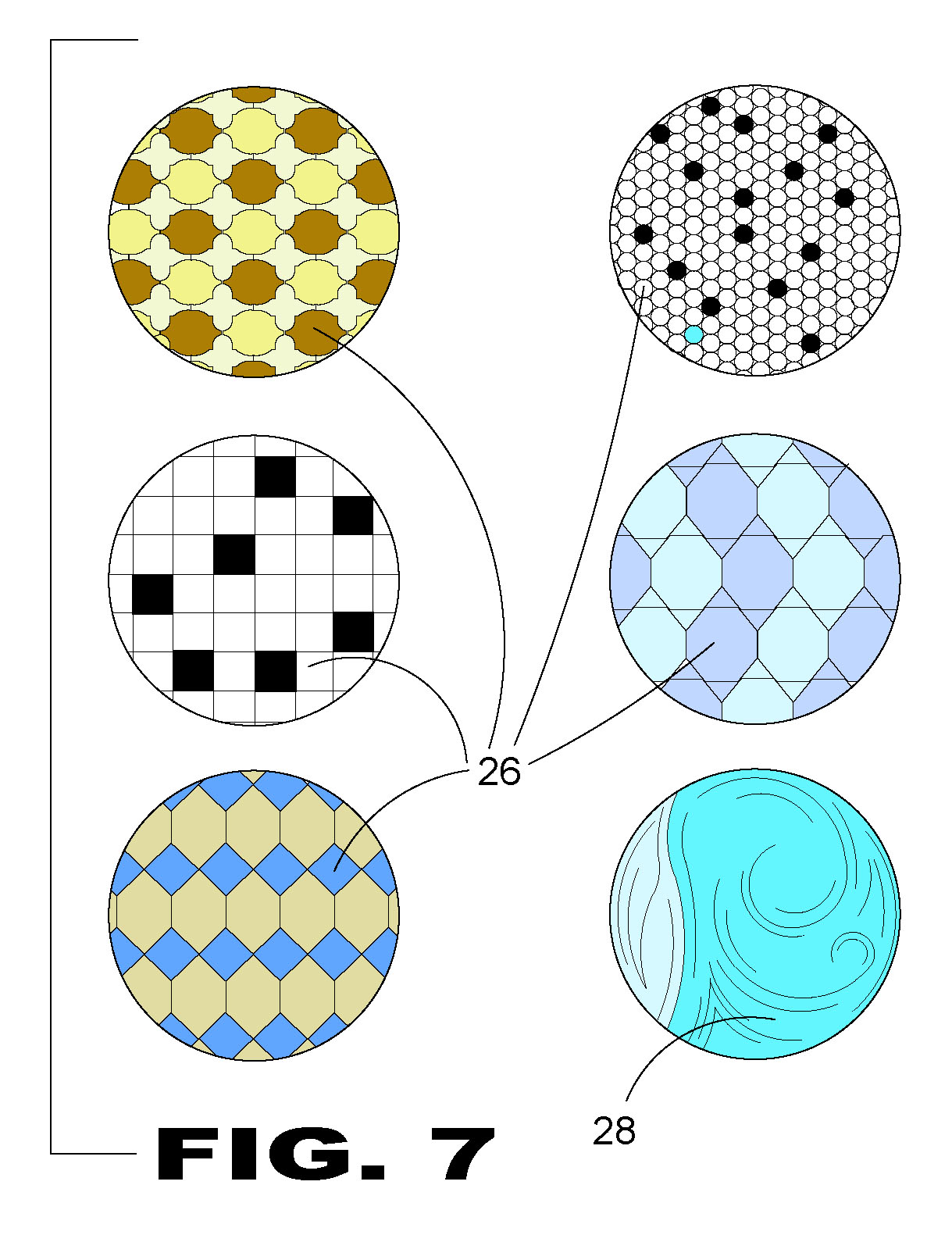 Figure 7 shows an example of the variety of tile patterns 26 that can be used with the present invention. Additionally seen is a swirl or like type pattern that could be incorporated into the slab type embodiment 28.

If you are interested in licensing, purchasing the rights to the above invention or entering into a royalty agreement please contact the office of Michael I. Kroll as follows: